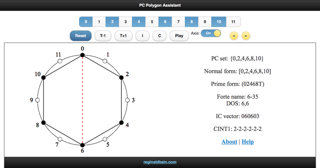 PC Polygon Assistant is a touch-optimized Web app that uses SVG to render the polygon notation (Toussaint 2013) for any pc set. Moreover, it reports the basic properties of the Tn/In set class (Straus 2016) and cyclic interval array of the prime form (Morris 1987), and allows the student to explore transformations (Tn & I) and relations (C) in pc space. Playback is available via Web Audio API. This program is currently in beta testing. For more information, see my ATMI 2016 presentation. 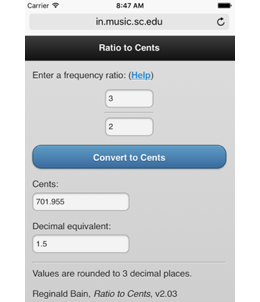 Ratio to Cents: Allows students to convert an interval frequency ratio to cents

Ratio to Cents is a simple mobile Web app that allows students to convert an interval frequency ratio to cents on their smartphone. Built with jQuery Mobile, the program utilizes the following conversion formula:

where c is cents, and f2/f1 is a pitch interval expressed as a frequency ratio. Students typically enter a frequency ratio derived from the harmonic series, or a tuning system like Pythagorean intonation,

Like its companion program Atonal Assistant, this pedagogically-oriented JavaScript application was written in the late 1990s for maximal compatibility with Joseph N. Straus's Introduction to Post-Tonal Theory. It performs basic 12-tone row operations and generates matrices useful in the composition and analysis of twelve-tone music.

The Harmonic Series: A Web-based multimedia introduction to the harmonic (overtone) series for musicians.

News: I am in the process of developing a mobile-friendly version of these resources 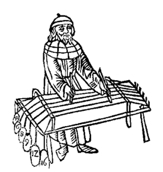 String Length and Pitch Interval (SLAPI) is a harmonic series interval player. It provides my students with a convenient way to compare the size of pitch intervals within the octave (Gann 1997) based on integer frequency ratios. The student enters a ratio (e.g., 3/2) and SLAPI calculates the frequency above A4 that corresponds with that ratio and plays the interval (e.g., 440 & 660 Hz) using a Karplus-Strong plucked string tone sample. The program reports the ratio's decimal equivalent (1.5), size in cents (702), and difference from the nearest equal-tempered interval (+2). The equal-tempered counterpart is played using a sampled piano tone.

News: I am in the process of developing a new version of this program using Max 8.

Gann, Kyle. 2019. The Arithmetic of Listening: Tuning Theory and History for the Impractical Musician. Urbana, IL: University of Illinois Press.